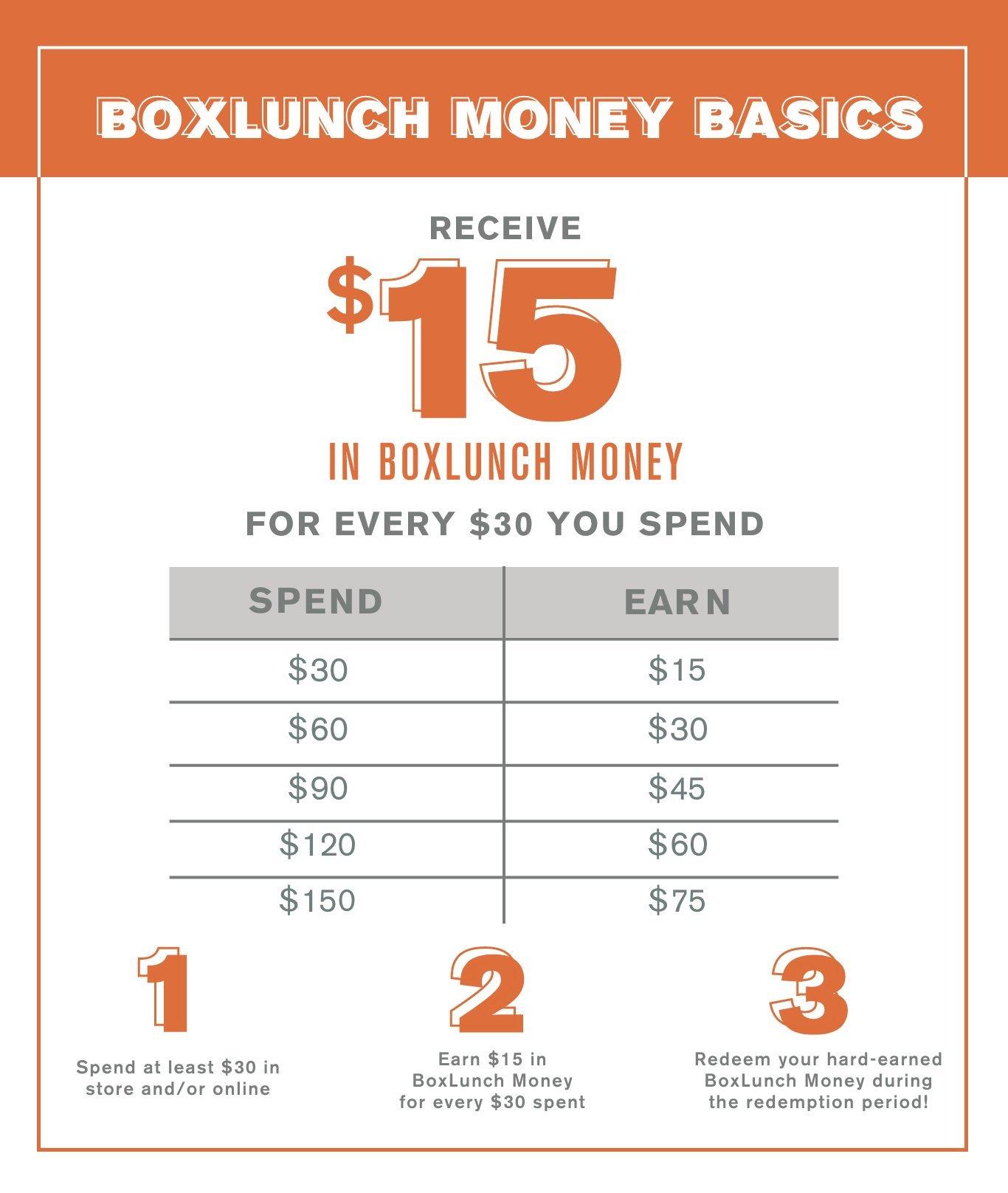 WHAT IS BOXLUNCH MONEY?
BoxLunch Money is a coupon program designed to save you money at BoxLunch! You can earn a $15 Off BoxLunch Money coupon for every $30 you spend.

WHEN DO I EARN BOXLUNCH MONEY?
BoxLunch Money is earned during specific earning periods online and in-store. The amount earned is based on the total amount of an eligible purchase, before discounts, taxes and shipping.

HOW WILL I RECEIVE MY BOXLUNCH MONEY IN-STORE?
A BoxLunch associate will include any BoxLunch Money coupons earned with your purchase at the register.

HOW WILL I RECEIVE MY BOXLUNCH MONEY ONLINE?
You will receive a single BoxLunch Money coupon for each order in the total amount earned. It will be attached to your receipt and shipped with your order.

WHEN CAN I REDEEM BOXLUNCH MONEY?
Check your coupons for redemption dates and spend them in-store or online! We’ll also send you an email when it’s time to spend.
Sign up for email HERE.

​ ​
HOW DO I REDEEM MY BOXLUNCH MONEY INSTORE?
Spend your BoxLunch Money at BoxLunch stores during the specified redemption period by giving it to the associate at check out. There is no limit to how many BoxLunch Money coupons you can redeem in store.

CAN I COMBINE MY BOXLUNCH MONEY WITH OTHER COUPONS?
Earning BoxLunch Money:
BoxLunch Money can be earned even when applying other discounts and offers to your purchase.

BoxLunch Money coupon may be redeemed at BoxLunch stores or BoxLunch.com during redemption period with the minimum qualifying purchase as stated on the coupon (before tax and excluding shipping). Valid for one time use only and must be presented with packing slip or register receipt for purchase verification at BoxLunch stores, or, for online qualifying purchases, use the promo code printed on the coupon. Must surrender coupon at time of redemption in stores. Cannot be combined with any other discount or offer. Excludes Hamilton merchandise, Nendoroid, Nixon Watches, PopSockets, select Petunia Pickle Bottom, select Loungefly, select Funko products, select collectibles, select home goods, select jewelry, accessories, and beauty, select apparel, select books, donations, prior purchases, gift cards, taxes, or shipping. Other exclusions may apply. Void if copied, reproduced, sold, or transferred. Void where prohibited. Coupon has no cash value, is not redeemable for cash, and will not be replaced if lost or stolen. Associates of Hot Topic, Inc., BoxLunch and its affiliates are ineligible. Hot Topic, Inc has the right to end or modify this promotion at any time.

You will now be the first to hear about BoxLunch sales and news. Please add boxlunchonline@boxlunch.com to your E-mail address book or approved senders to ensure delivery of all BoxLunch.com e-mails.